Press enter to begin your search

Adapted from an article originally published on the Huffington Post Contributor Platform on 19 January, 2017.
Co-authored by members of The Value Web: Patrick Frick and Chris Luebkeman
Illustrations by Mike Fleisch

“How will we provide nutritious food
to the 9.7 billion humans of 2050 in a way
that is both inclusive and sustainable?”

Such a succinct question is wrapped in a web of complexity.  Details of this overall challenge include:

Success in feeding humanity in 33 years will hinge on coordinating – from pitchfork to table – the actions and agendas of dozens of countries, hundreds of institutions, and thousands of authorities ranging from farmers to heads of state. 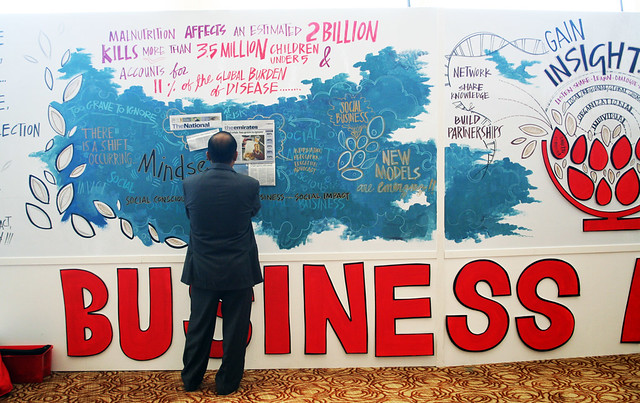 ABOVE: A participant in the 2010 GAIN Business Alliance Global Forum contemplates these planetary design issues.

Faced with such an overwhelming scenario, it is hard to consider how to move forward, or even find the will to take the first step. Yet we cannot be paralyzed by a complex world. After all, it is the only world we have.

A Shift In Perspective

As designers of The Value Web, an international non-profit focused on improving decision-making for common good within multi-sector/multi-actor collaborations, our job is to facilitate and seek solutions to such complex questions.

ABOVE: a small collection of interconnected issues are mapped at the 2009 World Economic Forum in the Middle East.

Ironically, we believe that the best way to start coping with just this type of mind-numbing complexity is with a simple change of mind-set.

We must place the planet and all its citizens at the heart of every discussion, instead of continuing the historical trend of focusing on what is best for a particular collection of humans.

For decades we have toiled under the idea that what is good for one human will improve the quality of life for all humans. By design, this is a very egoistic and self-centered approach that becomes especially problematic in common good issues that involve things like water, food and the climate.

Which Human To Choose?

Going back to our original question of feeding the masses of 2050, how might we decide which humans to focus upon? Putting just one human or grouping of humans at the centre of the equation means that many other voices are marginalized or even silenced.

There are many major groups deeply involved in shaping food systems. They stretch from groups that farm, produce and sell food, to those that ship it all over the world, to those that own the lands and administer it, to groups that donate money and invest with the aim to end poverty, researchers interested in improving seed quality or thinkers tinkering with the overall food system’s architecture and, last but not least, all of us who are consumers.

Problematically, the above actors often have diverging interests from one another. Even within one group, designing a perfect solution for one member might deeply upset another. And the food sector suffers from agricultural policies that often protect a specific country or economic zone and therefore deprive many countries with competitive agricultural sectors from exporting and selling their goods.

Focusing on the needs of humans also often ignores the physical consequences and impacts we humans make. We optimize our systems for human success, not for the overall success of the local, regional or planetary systems.

Human-centred design (UCD) tends to turn a blind eye to our planetary limits, failing to acknowledge or even consider that we still don’t have a viable alternative to the one planet we are consuming at an alarming rate.

According to the Global Footprint Network, reasonable UN scenarios suggest that if mankind continues with current population and consumption trends, in just 15 years we will need the equivalent of two Earths to support us. Of course, we only have one.

We know that when the needs of the planetary ecosystem are ignored so that the needs of humans are satisfied, the planet suffers. Today, however, the growing realization is that the rapid degrading of many of these same ecosystems is in turn detrimental to the human race.

By Design, Not Default

The time has come for the next evolution in thinking, building upon all the lessons learned from human-centred design. We can increase our collective capacity to deal with complexity by shifting our mind-set and simply widening our viewfinder.

It is vital to the future survival of humanity on planet Earth that we apply a new approach to communication, decision-making and policy-making in complex social environments by putting the planet first.

We believe that planet-centred design is the only way forward.

We Only Have One Planet

Some reasons for this belief are abundantly clear. For example, every year human resource consumption exceeds – by more than 50% – Earth’s capacity to regenerate those resources that year. We are draining aquifers faster than rainfall can naturally fill them. Topsoil is eroding faster than it can be formed. Oceans are overfished. And since 1970, half of all vertebrate species in the air, water and land have become extinct.

Only humans can ensure sustained human existence on this planet. Right now, we are destroying the object on which we depend. Recognizing this makes our need for a new paradigm painfully evident and immediate action imperative. We must make the one-planet notion a fundamental design constraint for all of our decisions, and plan accordingly.

Every solution must keep this in mind.

There is No I in Team

Another reason for a planetary focus is the fact that all of us are on spaceship Earth, a term popularized by Buckminster Fuller back in 1968. Everyone is part of a singular, complex planetary system, no matter where you live in the world, how much money is in your bank account, from what family you descend or what organization you are affiliated with. The artificial divide into ‘us’ and ‘them’ all too often insidiously poisons any undertaking to find solutions to complex problems.

Building empathy for each of the components within our world will always lead to better, holistic and sustainable outcomes. The short-term thinking of many solutions that might make some of ‘us’ better off will have many negative – often unintended – consequences. These zero-sum outcomes then leave all of ‘us’ in a far worse systemic situation. Acknowledging the fact that “there is only us” will help us to find solutions that are much more inclusive and able to answer to the needs of the whole planet.

We Must Incorporate Diversity

Planet-centred design is inspired and informed by the Law of Requisite Variety for controlling complex systems, proposed in 1956 by Ross Ashby, which basically states that one must incorporate sufficient variety in order to have flexibility and adaptability. Put another way, involving fewer people in decision-making simply creates rigid solutions that will fail ultimately.

It is an illusion that a strong leader can solely solve all problems. Instead of sitting down to solve an issue based on his or her singular focus and ideas, requisite variety demands that we must mirror the system we are trying to fix by engaging all the actors within it.

When we started to work with the World Economic Forum in 2006 on the design and facilitation of its initiative to ensure food security by 2050, approximately 2.5 billion people depended on agriculture for their livelihoods. We invited a large and bewildering ecosystem of actors to come be a part of our mission. It took years, but we got UN Secretary General Ban-Ki Moon and the CEO of Unilever Paul Polman to sit shoulder to shoulder with farmers and collaborate. They were joined by community leaders, private companies who try to buy, produce, store and distribute food, government leaders concerned for their citizens and NGOs fighting for the rights of the poor.

The Value Web contributed an effective approach for facilitating that did not produce confusion or chaos but emergent outcomes.

We knew that if we hoped to have a positive impact on the global food systems, we had to bring in more and more people into the effort. After a multi-year run-up, eventually the New Version for Agriculture (NVA) was established in 2009 and since then we have engaged more than 1,400 individual leaders in all the stakeholder groups mentioned above, including senior-level champions, operational practitioners, technical experts and thought leaders. More than 600 institutions have been engaged.

They are working through a variety of country-led collaborative initiatives currently underway in 21 countries, supported by two regional secretariats – Grow Africa and Grow Asia – and a global network.

When you believe that inviting everyone who has a stake in an issue to the table is imperative to co-creating a valuable and sustainable solution for everyone, suddenly you have a lot of minds all working together towards the same goal.

The current mind-set is still heavy on a legacy of protocol. People believe that decisions must be made in the same way they have been made before. They lean into the comfort of figureheads. They buy into the belief that a head of state contemplating food system shortages cannot gain anything valuable by sitting beside a farmer.

A planet-centred mind-set busts that belief. Suddenly we value the synergy between those who already have some or partial answers to our world’s problems and those who are in need of solutions.

For those who might be tempted to think that planet-centred design is a utopian construct, we point to how planet-centred thinking has brought hard-core capitalists together with a whole coalition of different actors to make substantial changes, progress and commitments. According to a case study written by Harvard Kennedy School on the NVA network:

“The organizations and partnerships involved have committed over US$10.55 billion in investments, of which US$2 billion have been realized to date, and are engaged in more than 90 value chain projects. They have reached 9.6 million smallholder farmers globally, 8.6 million of them through Grow Africa. Projects evaluated to date have enabled participating smallholders to increase their yields between 12% and 75% and their incomes between 10% and 75%. Improved technologies, farming and environmental practices have been implemented on around 450,000 hectares in Asia and Mexico.”

A planet-centred mind-set is only a condition for finding answers to the world’s complex problems, especially common good issues. It does not guarantee we will find them. But by understanding the absolute limits of our current approaches to solving large-scale and complex issues, we believe our world will move toward planet-centred action with the implicit aim to better the outlook for our planet – and each and every living thing on it – as a whole.

You don't have credit card details available. You will be redirected to update payment method page. Click OK to continue.